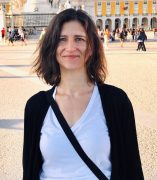 Dita Broz, PhD, MPH, is an Epidemiologist in the Division of HIV/AIDS Prevention, Centers for Disease Control and Prevention (CDC) where her work focuses on developing and implementing bio-behavioral surveys in key populations at increased risk for HIV, including people who inject drugs (PWID), men who have sex with men and women who exchange sex. Dita provides scientific oversight for the implementation of the National HIV Behavioral Surveillance system and she serves as her Division’s subject-matter expert on HIV prevention among PWID. She has led investigations and supported emergency response efforts during recent HIV outbreaks among PWID and she supports CDC’s response to the national opioid crisis.

Prior to this position, Dita served in CDC’s Epidemic Intelligence Service in the Division of Global HIV/AIDS, where she provided technical guidance for implementing and evaluating national HIV surveillance systems in Kenya, Tanzania and Ethiopia. She has been the recipient of numerous awards including the CDC’s Thomas A. Bartenfeld Award for Excellence in Public Health Practice and the Charles C. Shepard Science Award. Dita holds a BA in Biological Sciences from Northwestern University, and an MPH and PhD in Epidemiology from the University of Illinois Chicago School of Public Health.